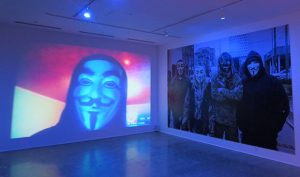 Known for thought-provoking art about activism, Bowers was drawn to the case for both personal, professional, and artistic reasons. Raised in a similar Ohio town, she has many positive memories of childhood and adolescence, but at the same time, recognizes the inherent contradictions of the particular culture of small town America. “Growing up in that environment as a teenager has made it difficult for me to overcome the emotional and psychological effects of patriarchy,” Bowers says. “This was a boom area in the industrial age, but it’s been in recession since I was a kid. There is a lot of pollution and there’s not enough work.” But there is something to rally around, she says of the area known as the Rust Belt: “Football is everything. You don’t fuck with football.”

The Steubenville case involved high school, not college, students, and its sadly all-too-familiar story unfolded over one drunken summer evening. It included a group of teenage boys literally dragging an unconscious girl from party to party while subjecting her to repeated sexual assault and mockery while numerous teens looked on, many of them documenting the events in texts, tweets, and image posts. The case ended with two up-and-coming stars of the local high school football team, the quarterback and the wide receiver, being convicted of rape. If the details of the case were hazy at first, this changed when the “hacktivist” group Anonymous acted on information from independent local reporters and stepped in. They attempted to shed light on the burgeoning investigation that may otherwise have stayed in the shadows, in order to seek justice for the girl, referred to as Jane Doe.

Bowers traveled to Steubenville three times to document the trial and events leading up to it. “My father and brother drove me three hours through the snow to get there,” she says. As part of her research, Bowers interviewed local townspeople, Don Carpenter and other reporters, as well as members of Anonymous. But while the Anonymous campaign began online, she notes that, “Most of the people you see in those masks [outside the courthouse] are local people. They came out in support of [Jane Doe], but didn’t want to be recognized.”

The two primary works in the exhibition include a powerful drawing/text installation consisting of handwritten transcripts of the youths’ text messages about the night, on view at Pitzer College Art Galleries, and a video that the artist compiled from footage she took of the town and media and online clips about the incident, screened at Pomona College Museum of Art. Co-organized by Ciara Ennis, director/curator at Pitzer, and Rebecca McGrew, senior curator at Pomona, the exhibition is doubly important as art and as public record; it represents one of the only times the teens’ text messages from the time period have been made available to the public. (The majority of these are also published on the blog of independent reporter, Don Carpenter.) Of the evolution of this joint exhibition, Ennis says presciently, “Both Rebecca [McGrew] and I thought that the lack of discussion around the under-acknowledged issue of rape culture on college campuses was a critical matter that needed to be aired. As we both work on college campuses, the subject became even more urgent and compelling.”

Building on two decades of work about activists and social change, this exhibition again reveals Bowers to be uncannily adept at utilizing visual and aesthetic strategies to build on the content she presents with as little editorializing as possible. The large drawing, spanning three walls at Pitzer, “Courtroom Drawings (Steubenville Rape Case, Text Messages Entered As Evidence, 2013),” 2014, is the result of the artist painstakingly writing the text message transcript by hand, not once, but twice. Of the first time, in the small, packed courtroom, Bowers recalls, “My cell phone was taken from me. No recording devices were allowed. I was also told that I could not sketch any of the people in the courtroom. I was only allowed paper and pencil.” When the teens’ text messages began to be read aloud, Bowers rummaged through her purse to find any additional scraps of paper she could on which to record the graphic words. “It was horrific,” she says, “I could not believe what I was hearing. I had to write really fast. It was emotionally intense but at the same time I wanted to be sure I recorded everything.” Back in her Los Angeles studio, Bowers wrote the text again, this time, more slowly and on large white sheets of paper. “Once I got to the point of drawing them,” she says of this period, “I was numb.”

In the finished work, neat white letters spell out the boys’ disturbingly blithe attitude (the letters “LOL” appear repeatedly as the teens discuss what they refer to as the “dead” girl). The text reflects the ensuing shift from misogynist braggadocio to increasing levels of anger and denial (the words “bitch” and “whore” begin to appear repeatedly) as the possibility of getting caught arises. Only when it becomes apparent that adults know about the situation do they begin to urge one another to remove the pictures and video of the night. (“Delete that off YouTube. Her dad and Coach Sac knows about it. Seriously delete it”).

Behind the letters, the paper is covered in shades of blue, shifting from bright turquoise to midnight and back again throughout. The luminous color is applied with the most prosaic of media. “I used marker because teens used a lot of markers,” Bowers explains, noting that she “also wanted to reference the blues of cell phones and computers.” The color does lend the piece an oceanic depth that hovers somewhere between a digital void and a curiously beautiful black hole. Bowers’s restraint in treating the paper on which the text is transcribed with a limited palette and minimal texture allows just the right amount of emotional space to surround the simple but powerful words, which speak for themselves.

The video, “#sweetjane,” 2014, is similarly unadorned. A compilation of footage of the town, mainstream news, independent reporting, interviews with participants and townspeople, and Anonymous postings unspools in an orderly way, allowing viewers to come to their own conclusions about the material. The one concession Bowers makes to a personal or subjective point of view is the inclusion, at the end of the video, of videos from her own youth as a cheerleader. Seeing the artist as a smiling teen performing with her team in their red and white uniforms is a poignant reminder of what one of the members of Anonymous states in an earlier clip, “What if it was your child, mother, sister, niece or nephew that was raped? Would you want the guilty to be punished for the actions they have committed?”

For this writer, the most compelling statement in the entire exhibition — and case — is a single question offered by Jane Doe and recorded at the bottom of one of the vertical panels on the wall at Pitzer. On August 12, at 10:04 a.m., she texts one of the two boys eventually convicted, “Why wouldn’t you help me?” This is the central question that hovers around the images, between the lines, and throughout the exhibition — and our nation. Why, indeed, didn’t someone help her? Dozens of students interviewed by police investigating the case reported observing the situation unfold — many of them took and posted pictures — but not one of them stepped in to stop the abuse and rape. Not one contacted an authority figure. There is something indelibly wrong with that situation.

When I ask Bowers to explain what “rape culture” means in her own words, she says simply, “It’s communally sanctioned rape.” That the core of this case — a group of boys brazenly sexually assaulting a young girl without her consent — is all too familiar speaks volumes about a topic that demands considerably more attention than it currently receives in our society. The new task force is a sign of hope but Americans as a whole need to come together to identify and change the mindset behind this epidemic. As Ennis states, “Although the ‘Jane Doe’ of Andrea’s project came from a small impoverished town, rape culture is endemic and is not confined to a particular class or privileged culture.”