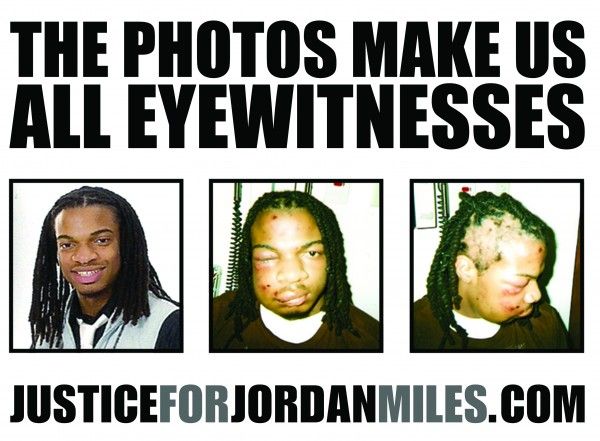 Members of the Pittsburgh media began the morning quietly discussing the Judge’s gag order preventing lawyers from both sides from talking to the press.

Everyone agreed that the aggressive media updates from the first two weeks prompted Judge Cercone to order all parties to stop speaking to media for the duration of the trial.

Wymard would continue to try to slip Jordan up into admitting that he knew the defendants were police all along, while asking the same questions he asked during Thursday’s initial cross examination. Within the first ten minutes of Jordan’s testimony today, Joel Sansone had objected over a dozen times to the line of questions, and several arguments erupted between attorneys and Judge Cercone.

Wymard would once again introduce multiple pictures of an old MySpace profile of Jordan’s where he dubbed himself “Bulky J”, to try to convince jurors that Miles wasn’t as weak as everyone thinks. Wymard even asked Jordan if he was trying to “prove how tough he really was” to the officers back in 2010.

“My pictures have nothing to do with that, sir.” Miles would tell Wymard.

An interesting and irrelevant question from Wymard was posed to Miles, inquiring about what a “gang banger” is, and if Miles was aware of a gang war between the Hilltop Bloods and the Race Street Crips in Homewood.

Wymard would go on further to insinuate that Miles had ducked between the houses (like the officers said) because in previous testimony, Miles said he originally thought the 99 car was proceeding down Tioga Street to do a “Drive By.”

Miles maintained he never ducked between two houses when officers first spotted him.

Miles would be repeatedly asked about his former friend Ryan Allen’s statements to the FBI that Jordan told him he had a Mountain Dew bottle on the night the three officers beat him. Miles told the defense and jurors, for the first time, that Allen had confided in him that he only told the FBI there was a bottle to get them off his back, as he didn’t want to be a part of the case.

Wymard would show jurors Jordan Miles’ mugshot from the Allegheny County Jail, and claimed defiantly that this picture shows no hair missing at all, and that Jordan never sought medical treatment while in jail for 22 hours.

“That picture is not a side shot and doesn’t show where my hair was missing,” Miles fired back.

Wymard continued his attack on Miles before ending as in the previous trial, again alleging that a member of the Miles family or a friend of the family had gone to Monica Wooding’s house the next morning—on January 13, 2010—to remove and hide a supposed gun clip seen in Wooding’s yard.

Fraternal Order of Police and Saldutte attorney Bryan Campbell would spend his cross examination going over Jordan’s medical history following what he called “the assault on and by police.”

Before Campbell began, Judge Cercone remarked, “After that extensive cross (by Wymard) I don’t know how you could have any more questions…..don’t be redundant.”

Mr. Campbell would rehash some of Dr. Twichell’s testimony about how Jordan had patchy amnesia, meaning he remembered everything up to the assault by officers, with hazy recollection of the incident after.

“You have been able to testify in great detail about the incident despite saying in the past you couldn’t recall much,” Campbell would tell Miles.

Campbell would question why it took Miles over a year to see Dr. Twichell, as well as why he had only seen a psychiatrist a dozen times since the incident.

He would further suggest Dr. Leathers dropped Miles as a patient due to his lack of attendance. Miles would counter that his insurance lapsed and he could not afford the healthcare.

Campbell also try and paint it Miles as not wanting treatment and suggested that he was forced to go by his mother.

Campbell would also ask Miles why he told his first psychiatrist that he had relationship issues with his mom—that he felt his grandmother was overbearing, and that his mother was too controlling.

Campbell would introduce Jordan Miles’ DMV physical, required for a leaner’s permit in June of 2010. Campbell would point out Miles didn’t list the health issues he has claimed occurred due to the altercation with the officers.

Robert Leight, Ewing’s attorney, would go back to Jordan Miles’ phone records from the night of the incident and focus on Jordan’s Bluetooth earpiece, and inconsistencies regarding Miles depositions about having, not having, and to whether the earpiece was charged or not that night.

Robert Leight would ask Miles if he was putting on a show for jurors, and the fact that he hasn’t regrown his dreadlocks means that Miles didn’t want the jury to see “the real Jordan Miles”.

Following the morning break, a lengthy side bar between attorneys would take place and Judge Cercone call for an early one hour lunch break.

After lunch, the plaintiffs rested their case, turning things over to the police officer’s defense lawyers.

“This case isn’t about guns, race, excessive force, or even about Jordan Miles. This isn’t even an attack on Jordan Miles who is a very likable young man… This is an attack on the lies he has spread throughout this case. This is about what any reasonably objective police officer would have done on that night of January 12, 2010,” Leight would tell jurors.

The first witness called by the defense was Officer David Wright. Wright, a friend of all three defendants, is owner and operator of Wright’s Gym, and instructor for the Pittsburgh Police in the use of force.

Wright, apparently not knowing where he was due to testify, delayed proceedings for several minutes as defense attorneys searched for their witness. Wright had gone to the previous trial’s courtroom on the 3rd floor. Oddly enough, Wright was not sworn in before he testified.

No new testimony from Wright, his testimony was exactly the same as last time.