If you keep failing at making “news” websites,  keep being exposed for lying, plagiarizing, and pretending to be what you are not, Austin Ayers certainly is sticking to his script of making websites, abandoning them when outing and moving onto a new one with fake identities.

After being exposed as creating his last fake news website and false identity of  person who doesn’t exist, Ayers quietly created a new “news website” and face book page for Penn Informer recycling images from the internet, taking from  local mainstream media news sites, and cherry picking/copying and pasting sentences from  their articles.  a “Breaking news” update on his new site claim it belongs to a Warren Albrecht of Bridgeville, Pa, but any public record searches including property records, birth and divorce records show that  a person of that name doesn’t exist anywhere in Bridgeville, Pa or his alleged home of Altoona, Pa. A Facebook page created on July 24, 2020 (one day after I exposed Ayers other fake personality) is under the Name Warren Albrecht, but Indiana University of Pennsylvania has no record of a man by this name attending their school. In Fact there is no evidence online that a Warren Albrecht exists in real life at all aside from this newly created Facebook page. The suspect Facebook page also follows all things that Austin Ayers follows on Facebook and has had zero activity since being created on July 24. Ayers is no stranger to making up fake identities for people that don’t exist or stealing real people’s photos from online sources for his scams.

A twitter account created in November 2016 of a different name was switched into the account of Penn Informer with over 3k followers. The majority of those followers contacted said they have no knowledge of following Penn Informer and swear the name of the account had to have been changed from something else. Also the account is followed by Ayers. 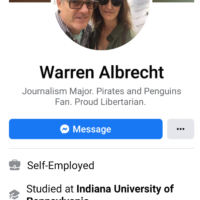 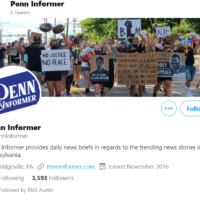 pages. the current Penn Informer website was bought for, and created on September 17, 2020: