Facing His day in court on August 16 on charges of impersonating public servants, theft, fraud, tampering with public records, making false statements and filing false state documents,  Ayers is still doubling down that the charges aren’t real, they’ve been dropped, and that they are false documents placed in the Pa courts sites by hackers who don’t like him.

Ayers posted this video on Tik Tok hours ago:

The video says he’s been an emergency responder for over 9 years (Ayers was born in 1991), didn’t register on the Pa ems registry or take national cert registry because he chose not to. (He was denied national certs due to his criminal charges of impersonation, and being unqualified, and never registered with Pa for the same reasons.)

On other social media accounts Ayers continues to be a Nasa astronaut/intern (He’s neither, and Nasa has never heard of him), and doubles down on stealing valor for things he has never been or done: 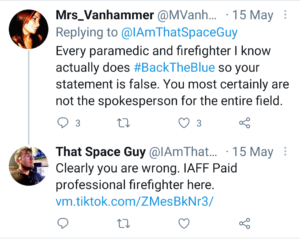 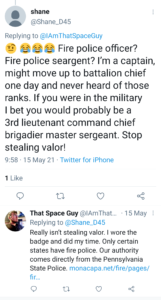 Back on Tik Tok he claims to have millions of fans (he doesn’t. according to social media sites where you can check someone’s account and followers, Ayers has over 100k paid followers that interact with his account very little.) He claims that state officials and police officers/fire chiefs have investigated him and cleared him on their own time and abused their oaths of office/power to search him on their state equipment, but no such searches exist and no one from  Harrisburg or the Pa State Police that I contacted can verify Ayers’ claims and refer me back to the very real criminal charges filed against Austin, and his upcoming formal arraignment in Armstrong County court of common pleas.

As early as a couple weeks ago, Ayers was seen posting on a local Armstrong County Facebook group (under a new name) about starting another one of his fake news sites before he was promptly ran out of the group by commenters calling him on his lies and criminal charges, and was blocked from the group.

Ayers further demonstrates his desperation for attention, validation by stealing valor from real journalists, firefighters, ems, police officers, and honest human beings by continuing to be lost in his fantasies, delusions, and lies.

Time’s running out though as august 16th he must answer for his lies and crimes before a judge, the citizens of Pennsylvania and before god.

His co conspirator, Ryan Focht is back in court on August 27th for a criminal case status conference.