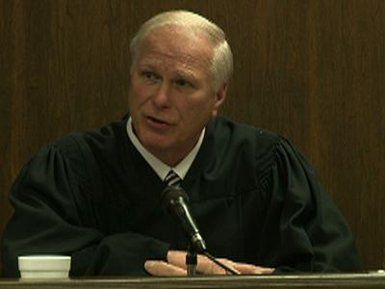 It was a cold night as i pulled in and parked my rented UHAUL makeshift media van behind NBC and diagonally from the Fox News production trucks. I made makeshift tags identifying the van as Mobile Broadcast News, and set up my gear in the back.
I lay down on the cot, and pull my zero degree sleeping bag over my head after hours of trying to sleep.

I  am woken up by the sound of the NBC and Fox News generators firing up at 5 am, and the chatter of technicians who are scrambling about trying to stay warm as they set up the satellite feeds. An eerie calm crept over the dark streets of Steubenville, as I change into my suit and walk around media alley outside of the Jefferson County Juvenile Justice Center.

I was greeted by Sherrif Fred Abdalla as I get in line to pass through the metal detectors. “I know this guy’s media!” Fred tells his deputies. “It’s Dan Right?” “Don sir good morning sheriff,” I reply as he shakes my hand.

“You’ll have to sit over there with the rest of media and wait Mr. Carpenter” Sherrif Abdalla tells me pointing to the gathering of mainstream media sitting and huddled in a corner. I join the other journalists as we wait for our court issued press passes and to sign in. “You’re Don Carpenter, right?” a man in a gray suit asks me. “yes I am.” I reply as he reaches for a handshake. “I’m Fred Abdalla Junior, we spoke on the phone yesterday, how are you today?” “You’re in the media room. It’s not going to be comfortable in there, but it’s the best we could do for how many of you there are, but you’ll still get to cover the trial.” I thank him for returning my call, show my MBN and Rustbelt Radio press passes, am given my court pass, and went back to the corner to wait for our escort to the media room.

Sherrif Abdalla comes back over to me and asks if i’ll also be covering the anonymous rallies as he has seen me do dozens of times before. He smiles when I say just the trial and maybe the rallies during lunch.

Abdalla tells me that he knows it wasn’t anonymous who made the threats against local residents and schools, and that anonymous has been nothing but respectful and are a group with good intentions. All the rallies have been peaceful, and his only complaint was 1 speaker at a rally who swore too much.

I’m soon given an application requesting permission to broadcast, televise, photograph, or record courtroom proceedings. A receipt and contract for the court that I acknowledge the judge’s rulings as it pertains to audio/video by the media during the trial.

“Hey Danny, wanna go grab a smoke?” Abdalla asks me as he hands  me a swisher sweet. ” I smoke these to calm my nerves.” We politely chat about my coverage of this case since December 23rd, and he informs me that the feds have leads on who really made all those threats months ago. “When I said I was coming after anonymous, It wasn’t THE anonymous, but the locals using that name to to stir shit up.” Fred says.

Abdalla asks if I have seen anything like this before as he motions to all the media trucks and journalists outside. “This is the top story int he world unless they find a new pope.” He exclaims. “Yup, it’s a media circus.” I reply as I head back in.

I arrive to the media room, which is no larger than a hotel room with 30 chairs in it facing a 20 inch flat screen tv with a local tv station technician manning the media feed for us. Judge Lipps opens the proceedings up with a ruling on the motions to dismiss. Providing witnesses from West Virginia show up to testify, the defense withdraw their motions for dismissal. Judge Lipps then conducts and hour or so meeting in his chambers, and i head downstairs to see if my partner Amanda has gotten in. Amanda wasn’t given a press pass, so she had to wait in line for public seating. Today only 6 members of the public were allowed in, so she had to sit downstairs for hours waiting to get into either the court room or one of the public viewing areas.

Media runs outside during the break, and I notice some anons outside the courthouse holding a banner, and i stop by to say hello.
By 1 pm, Amanda has still not been let in, and the trial has not resumed, so we leave for the day. The first day of a trial is lame anyways. Nothing missed because what was discussed and testified on were things already known to myself and readers/followers. We both agreed if she couldn’t get in we would leave.

As we exit the courthouse for the day, all of media is swarming around anonymous looking for b-roll footage and interviews. It should be noted that on day 1 media didn’t care about anonymous and their rally as we  discussed it int he media room.

By 3 pm only 3 witnesses were called giving the appearance that this trial would last longer than the planned 3 days.

The sidewalks of Steubenville were deserted aside from anons visiting local Yorgo’s, a local Greek restaurant. The streets had the usual amount of traffic, but the eerie silence still remained over the town. A ominous fog hung over the city limits as you left and entered the city.