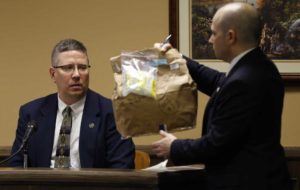 The Steubenville Grand Jury finally began meeting on Tuesday at the Jefferson County 911 Call Center to begin investigating whether other individuals broke additional laws going back to August in the rape of 16 year old Jane Doe by Trent Mays and Ma’lik Richmond.

Ohio Attorney General Mike Dewine has promised to bring closure to this case and to attempt to answer all the unanswered questions lingering from this case. Search Warrants were executed on school facilities last week in which documents, and computer hard drives were seized.

The most frustrating thing about this grand jury process for media and the public is that the proceedings are held in secret, are now expected to last weeks not the initial 10 days we were told, and a press conference will be held immediately following the grand jury’s recommendations to either file additional charges or that no new action be taken.

We’ll keep you updated as best we can here at Mobile Broadcast News.

UPDATE: the Grand Jury  has broke until May 23rd so that Ohio BCI can analyze more evidence and interview more witnesses.