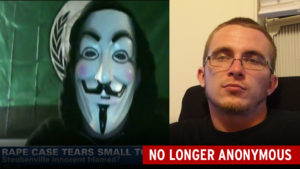 Photo: Gawker
In a statement on Project Knight Sec’s Website Ky Anonymous has unmasked and addresses the world:

Greetings Citizens of the World, I am Deric Lostutter, and this is my story.

Approximately  Mid-April 2012 a search warrant was carried out on my address in Winchester, Kentucky for alleged communications with one “Noah Mchugh” aka @justbatcat regarding the hacking of http://www.rollredroll.com and my alleged involvement in said hacking. Upon returning from a brief turkey hunt behind my farm I had just sat down and opened up my computer to work when my Pitbull, named Thor, jumps up on the door as is common for him to do when someone new is at my house. I had been expecting a T-Shirt in the mail from ShieldTactical.com and what appeared to be a Fed-Ex truck was parked in my driveway.  As I open the door to great the driver approximately 12 F.B.I. Swat Team agents jumped out of the truck screaming for me to “Get The Fuck Down” with m-16 assault rifles and full riot gear armed safety off, pointed directly at my head. I was handcuffed and detained outside while they cleared my house. My brother soon emerged later with his new girlfriend, both bewildered that the F.B.I. was at my house seeing as I have no prior criminal history, both of them in handcuffs as well. The Swat team left my belongings in the floor, my dogs shocked, my family nervous, my garage door battered open with a ram though I stated I had a key, and the RV camper window broken for entry though I stated to pull hard on the door.

Looking around I seen the Swat Team of course, a few fbi detectives from Columbus Ohio, Lexington KY, and Louisville KY. Also with them were a state trooper or 2, a local sheriff, and shortly thereafter the buildings were cleared the CIS labcoat wearing “Geek Squad” so to speak who analyzes your “evidence”.

I was detained on the back patio, I asked if I was going to jail, they said no, they said who are you, I responded KYAnonymous. They asked me a few questions, asked me for my passwords for my account, stated that I could not tell anyone I was raided or I would face additional charges such as “destroying/tampering with evidence”. They pulled out ALLEGED emails between me and @justbatcat aka Noah McHugh from Noah’s inbox indicating that someone is trying to “sell me down the river”. They stated they had been watching me for a long time, prior to Jim Parks, and that I was a good guy, and even joked around a bit about the good things I have done, none the less, sincere or not, They are the FBI and to them I am Anonymous, the embodiment of a dangerous threat according to their m16 assault rifles aimed at me for a computer.

Before they departed, I asked them for names and badge numbers of each involved. I got none of them as I requested and subsequently it took me the better part of a month just to get a phone call returned for the status of my belongings let alone tracking down my case agent to Columbus, Ohio.  I asked Agent Bixby (who in all fairness seems to be fighting for me and believes I am a good guy) the status of my belongings and they had no time table, as of this post they are still with the FBI being analyzed. I was emailed their intent to send out a “Target Letter” which means they are going to try to indict me for a Federal Offense, (most likely a felony and two misdemeanors) to a secret Grand Jury of 23 individuals, for which I can not be present to state my side, nor state my innocence. Let us not forget that Batcat did the hack, as stated in the Herald  ARTICLE HERE which by all accounts is a clear admission of guilt. So I am curious to see the charges, as is the lawyer I have teamed up with, Jason Flores-Williams of the WhistleBlower Defense League.

WBDL is a group of very serious attorneys who come to their clients aid mostly “pro-bono” and look to defer defense costs through “Grass Roots” fundraising. Hence the need for a store on this site, and the wepay campaign which will be on this site later today.  The group was founded in most part by famed attorney of Commander-X , Jay Leiderman.

This is my call to you, in the media, in the world of anonymous, who look to change the world to a free, transparent one, to my friends and family as well, to come to my aid, if you can find it in your heart, share my story, donate, buy a sticker, rally in the streets to demand the investigation against me be dismissed. I stood up for a rape victim, I shared information that was public, I had an opinion, and now I am needing you to stand up for me.

To contribute to Deric’s defense, please make checks payable to:

Mail checks to the WBDL at:

You can view the FBI Warrants On Ky/Deric here

KnightSec started as a group of hacktivists within the collective known as “Anonymous” whom, against some, “White-Knighted” under the flag of “Anonymous”. They stuck up for victims of rape, abuse, bullying, and more in the face of adversity. Some were hunted down and outed publicly, others raided by the Federal Government.

This site was founded to tell their story, and to launch “Project #KnightSec”, which on twitter from this day forth shall be hashtagged #ProjectKnightSec. #ProjectKnightSec aims to do 2 things, promote activism in the youth and old of the world, and to immediately change the world around every one of us for the better.

You do not have to be technical, you do not have to be “Anonymous”, you just have to have the initiative, the drive to volunteer, to change the world. Plant a tree, Raise a forest. Speak out publicly against bullies both in school and workplaces. Volunteer to clean up disasters, Volunteer at a local soup kitchen, whatever it is you do, commit one good deed a day, or hundreds if you wish, and simply ask those whom you help to “pay it forward.”

Go out now, and promote the idea that is #ProjectKnightSec”

Ky Anonymous briefly returned after going on hiatus during the Steubenville trial in the form of a hacked twitter account formerly belonging to another anon, Popadopalous. It is unclear what Ky will be announcing later today, but rest assured with a person who was creditied with weaponizing media during the Steubenville rape case, After speaking with KY off the record, we are expecting the announcement and Project Knightsec to be huge.

Update since this article is listed on Lostutter’s website I am adding other links to other articles I wrote where we have discovered lies, inconsistencies and refusals to issue refunds:

8/18/13 Lostutter on issuing refunds to concerned donors: Suck My dick