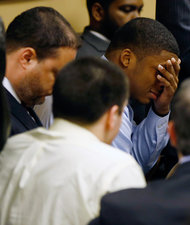 Trent Mays and Ma’lik richmond will find out their sexual predator tier rating in a hearing scheduled for June 14, 2013 when they see Judge Thomas Lipps again. Lipps found the boys delinquent in the rape of a 16 year old Weirton girl in August. The boys were sentenced after a 5 day trial in March.

The tier system consists of 3 levels of sexual predator classifications. Tier I (a minor classification) requires the offender to report in every 10 years, Tier II has the offender reporting their address every 6 months for 20 years, and the most severe rating, Tier III must report their locations to the local sheriff in any county they live and work in for life. Mays and Richmond are said to be responding nicely to their “rehabilitation” so far with no major incidents reported at the Cuyahoga Boys School institution.

Jude Lipps initially ordered the boys serve their sentences at  Paint Creek Light House Youth Center, a privately run facility for the Ohio DYS, and has “an excellent rehabilitation program for sexual offenders.” Paint Creek also has no bars, fences or cells, and is a minimum security facility.

Paint Creek must also evaluate both teens before determining their acceptance into the facility.

A Steubenville grand jury will reconvene on June 17th to determine if any more crimes were broken, and if any other individuals need to be charged in connection with the August Jane Doe rape investigation.

We’ll keep you posted on everything as it develops.