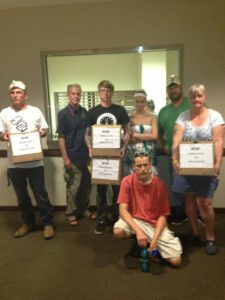 10 people showed up to hear Deric Lostutter/ Aka KY Anonymous speak outside of the Ohio Attorney General’s Office. It was very apparent that no one from #oprollredroll or those involved in Steubenville were in attendance. In fact, unless any of the 10 supporters who showed were anons and just were  unmasked for the day, it’s fair to say that no members of anonymous were present to support Ky as he spoke to his supporters and wanted to demand his charges be dropped. KY has not been charged with a crime in the 2 months since the FBI raid on his home, but his attorney’s are confident “He will be charged any day now.”

Ky still facing heavy public scrutiny over raising over $53,500 for his legal defense for when  charges are filed against him. Ky wearing a white Knightsec tshirt available from his website, and wearing an guy fawkes mask on top of his head accompanied supporters inside the building to deliver a 200,000 signature petition to drop the possible pending charges against the 26 year old rapper. Over the weekend another anon, @anonforecast claimed to have been raided by the FBI in connection with #oprollredroll In which this anon who had nothing to do with Steubenville was questioned about certain screen names from twitter and had his phone seized.

Ky Read a prepared statement from his phone, and the petition to the AG’s office was delivered. The rally lasted around 38 minutes which is a drastic switch from the #occupysteubenville rallies which would last 3-4 hours.

Where have all of Ky’s supporters gone?