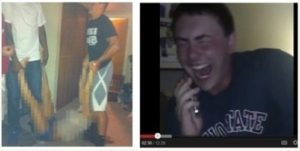 The following is court testimony from the rape trial of Trent Mays and Ma’lik Richmond which took place at the Jefferson County Juvenile Justice Center in Steubenville, Ohio between March 13th and March 18th 2013. These are transcripts of the trial using my notes that I took while in the Media room observing and reporting on the trial. I am only transcribing relevant testimony, and will spare you the long drawn out boring testimony of experts, and in my opinion insignificant witness who were called. I did not transcribe the entire trial, as I did step outside several times to do live updates, but being that the actual court transcript costs $6,500…..this is probably the closest thing the public will get to a court transcript of sorts. I apologize for not doing this sooner, but I had no time to do so until right now.

Gibb had testified it was hard to analyze some of the encrypter Iphones, this is all partial data retrieved from some of the Iphones.
Some of the phones gave little or no data, several phones not identified. Gibb id testify that there were alot of pics of other girls in either suggestive clothing or suggestive positions.

Madison argued that Mark Cole had images of other women on his phone, and possibly taken at his house from other periods of time. (also backed up by probable cause hearing transcripts.)