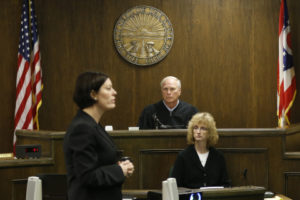 The following is court testimony from the rape trial of Trent Mays and Ma’lik Richmond which took place at the Jefferson County Juvenile Justice Center in Steubenville, Ohio between March 13th and March 18th 2013. These are transcripts of the trial using my notes that I took while in the Media room observing and reporting on the trial. I am only transcribing relevant testimony, and will spare you the long drawn out boring testimony of experts, and in my opinion insignificant witness who were called. I did not transcribe the entire trial, as I did step outside several times to do live updates, but being that the actual court transcript costs $6,500…..this is probably the closest thing the public will get to a court transcript of sorts. I apologize for not doing this sooner, but I had no time to do so until right now.

Mark Cole on the Stand

When Mark was called to the stand, he was accompanied by his attorney. When asked about the night of August 11, 2012, he invoked his 5th amendment rights, and was immediately offered immunity from the court and the Ohio Attorney General’s office for any and all crimes he may or may not have committed unless he was proven to be lying. Walter Madison, attorney for the defense supported the motion for immunity and mentioned that Cole had received letters from the state promising not to prosecute Cole while also bringing up a 90,000 signature petition to prosecute Cole an others.

Mays Attorney objected to the immunity deal stating that this is a juvenile proceeding NOT a criminal one. He hinted Cole is a guilty party in the same crimes Mays is accused of, while also mentioning that Jane Doe’s Civil Attorney was present in the court, an may be filing civil action against all the parties involved on the night of August 11, 2013.

Madison then objected stating that Cole may be charged for failing to report a crime if the judge does not grant the immunity deal.

Judge Thomas Lipps  granted the motion for immunity, and ordered Cole to testify.

Cole started out describing the night that he and others started the night off with beers at the Howarth house, then they opted to go to Kami Bellardine’s house party. Mark claimed that he stayed in the basement during the Bellardine party, an denied that Trent and Ma’lik Raped anybody.

Cole admitted to filming Jane Doe being fingered in his car by Ma’lik, but delete the video the next day. It was a topic of conversation how many videos Mark actually filmed that night.

During cross examination, Walter Madison brought up that Cole was underage and drinking, and also driving. When asked about the infamous JD photo online, Cole claimed it was a joke, and is “pissed off” all these outsiders are making an issue of it.
Cole admitted to drinking 8-10 beers.

Cole admitted following Jane Doe on Twitter and Instagram, and once the rape investigation started, he deleted all his social media accounts.

Trent Mays Lawyer, Mr. Duncan tried focusing on Cole’s sexual Activity along with the drinking and driving. The following is actual court Tesimony:

Mr. Duncan: You made a bad decision, but a conscious decision to drink and drive.

Duncan: So when other girls are being fingered, did they say how are you Mark?
Cole: NO

Duncan: If Jane Doe  was being fingered, It’s reasonable to assume she wouldn’t be talking or saying anything to you because it’s none of your business right?
Cole: yes

Duncan: Is it true the term Digital Penetration was taught to you by the prosecution?
Cole: Yes

Duncan: Ever hear of the term Voyeur or voyeurism?
Cole: NO

Duncan: You get aroused watching others engage in sex?
Cole: No

Duncan: So then you just liked filming it?
Cole: No. I made a bad decision.

Duncan: You were involved with someone sexually before you left the Howarth’s?
Cole: No

Madison: Are you happy you have immunity Mark?
Cole: Yes

Madison: Are you concerned about being sued Mark?
Cole: I don’t know.

Madison: You weren’t concerned at all about Jane Doe on the night in question, were you Mark?
Cole: NO

Madison final remark:
If the girl was involved in your car sexually with someone it was none of your business. but you filmed it, and You’ve made it your business Mark and that’s why we’re here today.

Evan Westlake on The Stand

Evan Westlake was asked his name and birthday when he took the stand, Westlake immediately pled the 5th to which Judge Lipps told the boy he must answer the questions. Same motions filed for immunity in exchange for testimony.

Neeman: Was Mark Cole too drunk to drive?

Westlake then went on to testify how he saw Jane Doe hugging and kissing Trent Mays, that he saw them laughing together all night. He also testified that he forcefully took Mark Cole’s car keys away b/c Cole was to drunk to drive.

Westlake: I never witnessed Mays penetrate JD or saw/took pics of her naked.”

When asked why he didn’t report the crime or tell his parents Westlake replied: “I decided to keep things to myself.”

Anthony Craig on the Stand
Same deal pled the 5th, given immunity for his testimony

Hemmeter: Did Jane Doe have trouble walking?
Craig: Yes
Hemmeter: Did she get sick?
Craig: Once she got to the Howarth’s she threw up.

Hemmeter:  Have you seen anyone’s fingers on or around Jane Doe’s Vagina?
Craig: Yes. Ma’lik’s near her crotch region

Hemmeter: did she move? Participate, move her arms, her legs?
Craig: No, No, no, an No

Hemmeter: Did you take any pics?
Craig: yes of Ma’lik, Trent and Jane

Hemmeter: and what was this picture of?
Craig: Jane was laying on her stomach, Ma’lik was behind her, and Trent was Smacking his dick off her head.

Hemmeter: How many pictures did you take? Why did you take pictures, and what was Evan doing?
Craig: I took 2 pictures, it was stupid, and Evan was sitting on a chain.

Hemmeter: Why didn’t you go back and help her after you left for Jake’s?
Craig: I assumed They were helping her. (Mays, Westlake Cole, and Richmond)

Hemmeter: When you got to Jake’s, did you show anyone the pictures? If so, Who?
Craig: I showed them to Shawn Magee who got pissed, Evan Westlake, and Nodi who thought it was hilarious

Hemmeter: Were you present when the Nodi video was made? What did you think of it?
Craig: Yes I was there, an I don’t remember.

Craig went on to further testify that he doesn’t remember texting with mays on August 11th or 12th, Does not recal texting Pat L “They’re gonna rape that girl.” Does not deny that those texts came from his phone.

Craig: “Not saying I did or didn’t send those texts….or that someone else did. It was over 9 months ago and I don’t remember.”

Hemmeter: Did you text someone in your phone called Jon Boy with “Jane got raped I think.”
Craig: I didn’t see her get raped, but I was worried it was an exaggeration

Hemmeter: Why did you text Jane the next day to see if she was ok then?
Craig: To ask if she was ok, she was extremely drunk, and I don’t know what happened when I left.

Hemmeter: Why did you want the picture of Jane from Mays?
Craig: I don’t know

Hemmeter: Why didn’t you tell Jane you took pictures of her?
Craig: I don’t know I had deleted them by the time I talked to her the next day

Hemmeter: Why did you ask her what happened?
Craig: I wanted to see if she remembered, she wasn’t moving, talking or participating in anything before I left.

Hemmeter: She relied on you. Why didn’t you tell her what you saw at Mark’s?
Craig: I don’t know.

Hemmeter: What does Lick the Cat mean? (referring to texts from Mays)
Craig: Oral Sex
Hemmeter: On Jane?
Craig: I guess so

Hemmeter: Why was Trent worried about the videos and pictures?
Craig: In case he got in trouble.

Madison: Anthony, the first ingredient to a party is beer. It’s no secret you enjoy a beer.
Madison then inquired about where all the alcohol came from to shich Craig denied knowing how the alcohol came about.

Madison: Would it be fair to say due to social media, you can find anything out about Jane Doe?
Craig: Yes.

Madison proceeded to go off on a tangent about text messages, and that things with smiley faces in the message are a joke

Madison: If I say to you with a smile, I’mma kill you, would you take it seriously?
Craig: I’d think you’re a psycho path
Entire courtroom, and media rooms erupt with laughter

Madison: What does a smiley face in a text tell you?
Craig: that the sender is happy

Madison: you said you waited 45 minutes to go to the Cole house?

Craig: Is that what I testified?
Madison: You did
Craig: then ok.

Madison: you felt the need to cooperate with the police?
Craig: I did.

Madison then produces defense exhibit MR1 a large slushie cup an asked if this is what Jane was drinking from to which Craig answered yes.

Madison: Shawn Mcgee was at Jake’s when you returned from the Cole house, did you talk with him? Was he Upset?
Craig: Yes, Yes and Yes.

Madison: With respect to Jane at the Cole residence, did you talk to her?
Craig: No

Madison: you can’t say if Ma’lik Richmond penetrated her with his fingers, can you?
Craig: Correct

Neeman: It’s tough testifying on this matter isn’t it?
Craig: Yes it kills me inside

Neeman: Because your close with Trent Mays?
Craig: Yes

Neeman: Do you know his dog’s name?
Craig: No

Neeman: you called Trent’s dad for 11 minutes crying and apologizing for testifying against trent didn’t you?
Craig: I don’t remember

Neeman: You had some kind of relationship with Jane Doe didn’t you?
Craig: Yes

Neeman: you didn’t like seeing her with Ma’lik did you?
Craig: No.

Neeman: Essentially between August 11th and 14th, in text messages you were playing Jane Doe and Trent Mays against each other weren’t you?
Craig: Yes

Neeman: So you lied to Jane Doe about not knowing anything?
Craig: Yes

Neeman: When you asked Trent for photos, were you going to tell or show Jane Doe?
Craig: Not necessarily

Neeman: When Nodi called her dead in the video, it was based off the pictures in your phone?
Craig: Yes

Neeman: You realize you have immunity, but could have been in alot of trouble for those pictures right?
Craig: Yes