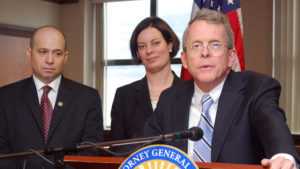 Despite promises by Deric Lostutter aka Ky Anonymous, The 14 person Steubenville Grand Jury resumed today and broke for the day without 48 indictments and Mike Dewine announcing his candidacy for governor of Ohio. Lostutter was quite adamant and down right defiant when challenged about his statements  in the weeks leading up to today’s grand jury session resuming.

The Grand Jury has now been seated 8 times since it’s creation on April 15th, 2013, with the jurors being tasked with hearing evidence, and looking into  whether additional individuals failed to report the rape of a 16 year old girl one year ago today as well as deciding if other crimes where committed during the initial rape, and rape investigation led by the Steubenville Police Department.

Trent Mays and Ma’lik Richmond were sentenced back in March for the rape of the young woman.

Ma’lik Richmond will be back in court this Friday to receive his sexual predator classification. Trent Mays has already been deemed a teen tier II predator and has been transferred to another facility to receive treatment and rehabilitation.

The grand jury will meet at least 2 more times this week and then potentially be on break again until September according to local station WTRF, The Associated Press and the Ohio Attorney General’s Office.