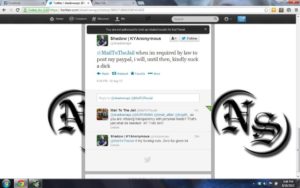 Deric Lostutter/Ky Anonymous is at it again. This time telling concerned citizens and anons asking for transparency when it comes to his donations to “Suck a dick.”

Lostutter made around $60,000 in donations for a legal fund to fight an indictment which hasn’t come in over 4 months.(around $6,000 of that fund was confirmed to have been refunded.) The Legal Fund was quickly pulled offline after the refunds and a remaining $53,0000 was left in an account which Lostutter will have to pay taxes according to Wepay terms of service.

Lostutter has raised money to start his own business, and then also raised an unknown amount of money for personal use.  It is these funds which have been called into questions not only by donors, but members of anonymous, the media, and concerned citizens believing that Lostutter is simply conning folks out of money at this point.

When repeatedly asked earlier this evening about making his donations transparent, Lostutter attacked the twitter accounts asking for transparency, and said when “he’s ordered by law to post his donations, he will until then, Kindly go suck a dick.”

Doesn’t sound like the man who once claimed to be the champion of a 16 year old rape victim, or someone who believed in changing the world.

Lostutter also claiming no one knew his role in anon before so the haters should shut up. It’s a known fact through Ky’s own words that he “was just a pr guy for anonymous” the guys who waves at the camera, and is no hacker. (despite most members of anonymous refusing to be on camera) Lostutter has repeated this claim for months now, and even to this journalist in twitter conversations going back the last few months.
Lostutter also requested $800 in donations to move when his girlfriend threw him out, which also begs the question where did all thiose personal fund donations go?

Lostutter even telling one donor who asked for a refund tonight to fuck off. You can read that post HERE
Lostutter then reiterated the person asking for a refund could fuck off-read that HERE

One thing is for sure, things are definitely beginning to collapse around Lostutter and his ego.
For someone who claims to be the face of change, and there to protect and save Steubenville (Lostutter is from Winchester, Kentucky), he certainly gets mean and threatening when he’s asked about his donations.

I have been asking Lostutter for weeks to address his proven lies, misinformation and personal attacks when confronted with the tuth for weeks. He still refuses to address the above items

Update 8/19/13  Rather than once again addressing the questions raised by his donors and myself, Lostutter prefers to accuse myself and MBN of being paid off to attack him. No sir not paid off, just reporting once again on your lises and falsehood.

Update 8/20/13 a second Ky donor has come out asking where their funds went after trying to ask lostutter several times and being ignored.