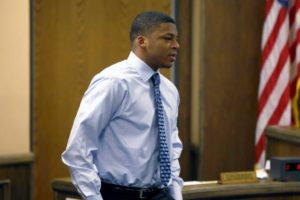 Ma’lik Richmon’s new public defender has filed an appeal on his Tier II Sex Offender status placed upon him by Judge Thomas Lipps earlier last month. Richmond was found delinquent in the rape of a 16 year old girl in March 2013 and was sentenced to one year in a juvenile sex offender facility.  His co-defendant, Trent Mays was also labeled a Tier II sex offender, and was sentenced to 2 years at the same facility.

Both teens as registered Tier 2 Juvenile offenders, aren’t listed on any publicly accessible offender databases, and can request that their statuses as  sex offenders can be removed entirely based on their rehabilitation.

The Public Defender now handling the case, Brooke Burns, declined to comment earlier today Saying she couldn’t discuss the appeal without the permission of her client.
Richmond was previously represented by ,high priced attorney, Walter Madison.

Madison after Richmond’s trial wanted to file an appeal on the grounds that Richmond’s brain wasn’t fully developed to understand rape was wrong.
Richmond’s appeal was filed last week with Jefferson County courts.

There is no information available as to why Richmond has switched attorneys.

A grand jury is on indefinite break regarding possible other criminal acts possibly committed during the initial rape and rape investigation regarding the 16 year old victim.

Texts That Lead to a Conviction in Steubenville Trial