Anonymous to Deric Lostutter: Stay the Hell out of #opmaryville 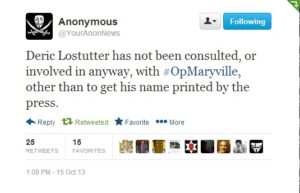 That’s the attitude from members of Anonymous all across the country as well as supporters of the group all over the internet today and in the recent days. Deric Lostuttter began once again seeking media attention by doing media interviews on behalf of Anonymous, and the organizers of #opmaryville. An operation to bring justice to a teenage victim and her family after a sexual assault occurred by football players in a tiny Missouri town