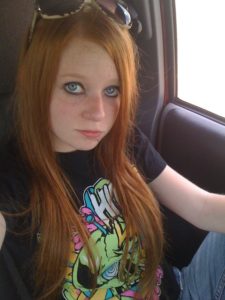 Walter Rhinaman’s 20 year old daughter Hannah, has also been indicted by the Special Steubenville grand jury on charges of (2 counts)Receiving stolen property and (one count) theft. All three charges are 5th degree felonies, and the charges are unrelated to her father’s indictment.

Miss Rhinaman could face up to 3 years in prison. You can read the Indictment Here.

Hannah was a Steubenville School employee who worked 188 hours at $7.70/hr on a purchases contract from August 20 thru September 12, 2012 assisting the Technology Department setting up computer labs, and updating software.

“I wish the federal government would leave my family alone.” and “I love how popular I am now that on the national news….Fuck Off.”
Both Walter(Pretrial Hearing) and Hannah  Rhinaman (Arraignment) will be appearing before Judge Cosgrove on Friday Morning at 11 AM

The Steubenville Grand Jury has adjourned on another break until an unspecified time.