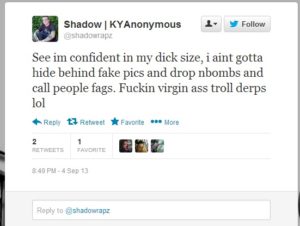 Facts like both Trent Mays and Ma’lik Richmond were arrested and prosecuted as adults (Later kicked down to juvenile courts) in August 2012. Lostutter and “Anonymous” didn’t get involved in the case until December 2012, 4 months after the legal proceedings had already occurred.

Rolling Stone claims Lostutter broke the case open leading to charges of the boys, which is utter bullshit based on the facts.

What the Rolling Stone Article failed to mention was Lostutter’s constant fame fagging on the back of a 16 year old rape victim, his fake stay in a rehab facility to garner sympathy and donations, The fact that Lostuttter did nothing but spread lies, rumors and falsehoods to garner international attention in the rape case, targeted innocent individuals both adults and children resulting in constant death threats to said innocents, and in fact hindered he investigation while getting immunity for those who could have been prosecuted for the rape, and failure to report a crime, and/or distribution of child porn by those who took pictures of the victim back in august in states of undress. because of Lostutter those individuals will never see charges.

The Rolling Stone article also fails to mention the countless others on the ground in Steubenville and West Virginia who organized the rallies attended by thousands in downtown Steubenville, or the fact, Lostutter himself gave up on the case in February 2013, leaving others to do all the work.

This article also failed to mention how Lostutter dropped the rape victim’s name multiple times on Twitter, exposed himself in a tiny chat room to minors, how he blamed anyone and everyone else for supposed criminal activity when the FBI raided his home. (to this day, no charges have been brough against  Lostutter despite his begging for thousands in legal donations.)

Following news of the Brad Pitt purchase, Lostutter conned the Daily Mail online into writing another false article stating the rape victim herself wanted a role and to consult in the movie if it were made. (just because the rights were purchased does not mean a film will be made.) After speaking with 3 of the rape victims friends on her behalf, I can confirm that Lostutter’s statements in the Daily Mail article are false. The rape victims has not expressed any interest in the possible movie, and merely wants to move on with her life and be left alone.

Lostutter’s fame fagging about this possible movie on twitter has brought nothing but harassment on social media to the rape victim, and her friends who have been outed multiple times with their twitter and facebook accounts being given to media for alleged proof that the lies Lostutter is spreading is true. The Steubenville Rape victim once again deleted her accounts when Lostutter began bragging about the movie among other things. The Daily Mail online has once again proved their reputation for lack of fact checking and being nothing more than a tabloid rag with their article. The rape victim’s attorney, Bob Fitzsimmons has not made any public comment on behalf of his client that she wans a role or consulting gig in this non factual movie.

The movie if made will do nothing positive for the rape victim herself who will be lost in the storyline stroking Lostutter’s ego, Piss off the Anonymous hive further who have long since said Lostutter is not one of theirs, and will further profit Lostutter who has made thousands in legal and personal donations.

Deric/Ky exposes himself to minors

Deric tells donors who want refunds to “suck his dick”

Facts of the Steubenville Rape Case