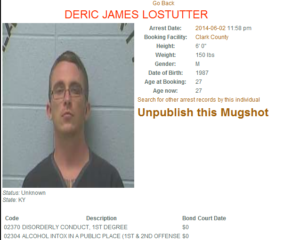 It’s been Awhile since we covered Deric Lostutter. When we last left this idiot he had Exposed himself to a underage girl in a tiny chat room, sent un wanted dick video and pictures to various women, lied about the Steubenville Rape Case turning it into a huge clusterfuck, faked a trip to rehab  and the list goes on and on and on.

Lostutter’s been busy lately dedicating his time begging for money to live claiming he is broke on facebook, while bragging he makes $2400 a month as a dj, and targeting, harassing and stalking women on Facebook and Twitter. You can dig thru his pathetic attempts at shaming women on Twitter via his Twitter Account HERE.

Recently, Lostutter tossed a statement online about his arrest that happened on June 2, 2014. (See Below)

1. No one leaked or even knew/gave a shit about this arrest except Lostutter who wanted more internet attention
2. Everything Lostutter stated in his version of events is absolute bullshit.

A detailed Police Report (Click Here to View It) shows that as usual Deric Lostutter is lying once again.
a 911 call was place on June 2, 2014 by a woman concerned for the safety of herself and her children when a Drunken Deric Lostutter and his 18 year old girlfriend (Lostutter is 27 btw), Hannah Lile both came onto the women’s property harassing her, her children and threatening her family. The Woman’s husband stepped outside to protect his family and began fighting with a drunken Lostutter. The 911 call has a drunken Lostutter in the backround threatening to “fuck their children up.
Officers responding to the scene had a tough time trying to control a drunken Lostutter who refused to listen to any of their commands and continued trying to fight with the husband when he was eventually taken into custody.

Lostutter’s 18 year old girlfriend Hannah, kept shouting and threatening the 911 caller prompting officers to also take her into custody.
Lostutter was checked out at a local hospital and taken to the Clark County Jail where he drunkenly kept asking guards if they “knew who the fuck he was.” all the while threatening lawsuits from his “legal defense team.”

After Lostutter kept threatening to injure himself and then sue everyone, guards restrained Lostutter on a bench for the night until he sobered up.

As you can see, it’s a drastic reality fact check upon the bullshit Lostutter tried telling his fans while begging for money for new DJ Equipment, living expenses and even moving expenses. It further  shows how full of shit this kid really is, and Makes you wonder why he’s still trying to profit off of the back of a 16 year old West Virginia Rape victim, and the terror he brought upon a town.

To this day, There have been no charges brought upon Deric Lostutter by the Columbus US Attorney’s office, and they maintain in the last year half no movement on his case has been made. NO CHARGES, NO INDICTMENTS….NOTHING! HE IS A FREE MAN.

Just yesterday Lostutter was seen targeting, harassing and trying to slut shame a woman simply for sharing info about the real Deric Lostutter.