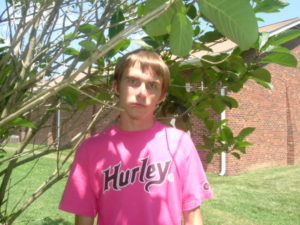 Lostutter’s response was to lash out like a 5 year old calling the girl a whore, referring to her as “used produce”, drop her real name, and city location putting her family, namely her child at risk. Lostutter followed up his attacks by encouraging all of his “fans” to seek the girl out online and harass her. He also began threatening everyone including his victim with law suits from his “Legal Team.”

Sadly for Deric, Tor Eckeland his Attorney if funded by over $50,000 in public donations to be used only for the purpose of a legal defense when and if the United States Government ever indicts him.

Lostutter also rather pleased with himself for being accused of rape began bragging about his rapist status on Twitter claiming that it’s awesome to “have reached Tiger Woods Status.”

The harassment of his victim is certainly no shock to anyone in the online community who has been witnessing Lostutter Threaten and harass women for months, even offering money to whoever could provide names and locations of some of his biggest female detractors online.

Lostutter capped the night off with insulting members of the Pay Pal 14, real internet heroes, and calling everyone Bitch and Cunt trying to make the internet backlash go away.

In exchange for his “fans” on facebook harassing his victim, Lostutter calls them his team mates (more like Accomplices).

I’m Guessing Lostutter now feels like all those people he accused of wrongdoings in Steubenville a(who did nothing wrong) about now.

The Internet Doesn’t  forgive or forget. Lostutter isn’t doing himself any favors because his conduct on line is screaming I AM GUILTY OF RAPE! in the eyes of many

I can only hope that finally Deric Lostutter’s days on the internet, profiting off the back of a rape victim, and harassing women are now numbered