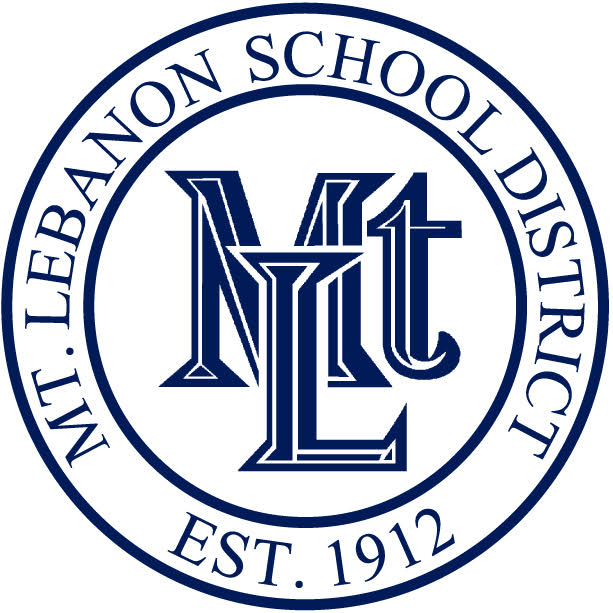 In a wealthy and dominantly white suburb just outside of downtown Pittsburgh, The City Stronger Than Hate, Racism has once again reared it’s ugly head in our classrooms. Mount Lebanon High School made the social media rounds, as an african american student named JB Nelson went to speak to a white student in class and was told that “she wouldn’t speak to him because he was black, and that black people are rapists and terrible people.”  Another teen, Mason Ventrone witnessed the classroom incident while the teacher was out of the room, and documented the interaction via his twitter account.  Following the Incident, JB understandably left the classroom for several minutes to confront the girl on her remarks, and received detention for leaving class without permission while confronting the girl.

Mt. Lebanon School district in an email obtained by me  to parents of all students in the district dated February 27, 2020  at 1:47 PM said the following:

Mt. Lebanon School District values all people as individuals and honors diverse backgrounds, experiences, and perspectives. Sometimes events occur that become opportunities for all of us to understand, learn, and grow.

There was a student disciplinary matter that occurred at the High School that included allegations of a student making racist comments and social media posts.  This event has resulted in the spread of some incomplete and inaccurate information on social media about the incident and the school’s disciplinary response. The High School administration is working closely with the Mt. Lebanon Police Department on this matter. Our joint investigation, which includes efforts to verify the source of some of this offensive material, may result in additional action if warranted. Due to our strong commitment to student confidentiality, we will have no further comment about this incident.

I want to emphasize that racism, racist comments, or actions motivated by racism will not be tolerated. Make no mistake, any discriminatory statements or actions violate School District policy. All allegations are thoroughly investigated, and disciplinary action is taken where warranted.

We remain committed to providing safe, supportive, and inclusive educational environments for each and every student.

The misinformation referred to in the letter is in regards to the online statement that JB received detention for confronting the girl on her racist views. JB had detention for understandably leaving the classroom following the incident and then confronted the girl.

This was a statement so white from the school that it  added it twice on it’s website:

The Mt. Lebanon School District and Mt. Lebanon High School administrators are aware of some incomplete and inaccurate information being shared on social media. The high school administration and the Mt. Lebanon Police are investigating the situation.  Should it be determined a violation of school policy occurred, appropriate disciplinary action will be taken. Since this involves student confidentiality issues, we have no further comment.” 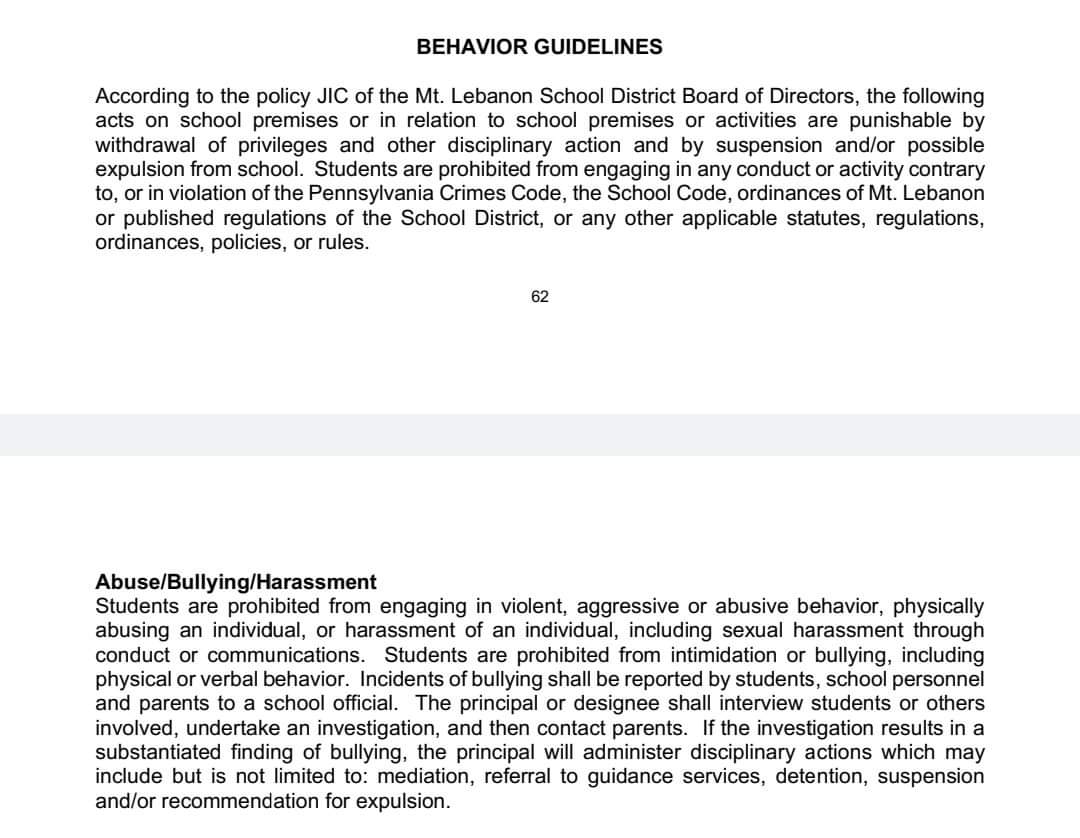 This incident is a blatant violation of Mt. Lebanon School district policies, but I could not get an answer as to why the teenage girl has received not disciplinary measures for her behavior.

as far as the social media posts further touting racist remarks and alleging she was jumped (it was not clear at the time of writing if the alleged beating was related to the classroom incident or if these came from the girls actual snap chat account or was screen shot and shared from another account) Chief Lauth confirms an investigation into an assault involving minors LAST WEEK, and that the allegations of an assault have been filed in juvenile court, but couldn’t elaborate further due to minors being involved.

Speaking further with Mr. Ventrone, he expressed the girl has no remorse for her actions, and has been liking racist responses to his original tweets on the incident.

Ventrone says the student body is upset over what happened in the classroom, and that the entire student body isn’t racist. a few instances of prejudice occur here and there in his opinion.

He also says the Schools principal had no knowledge of this incident till recently as the asst. principal handles all the discipline. He also expressed frustration that ir took a tweet and attention on social media to bring attention to this matter.

The girl herself still finds this funny and is sticking to her guns on her racist statements.

I reached out to JB before writing this and so far he has not responded.

Update: 3/3/2020:Mount Lebanon has released the following statement as an update: 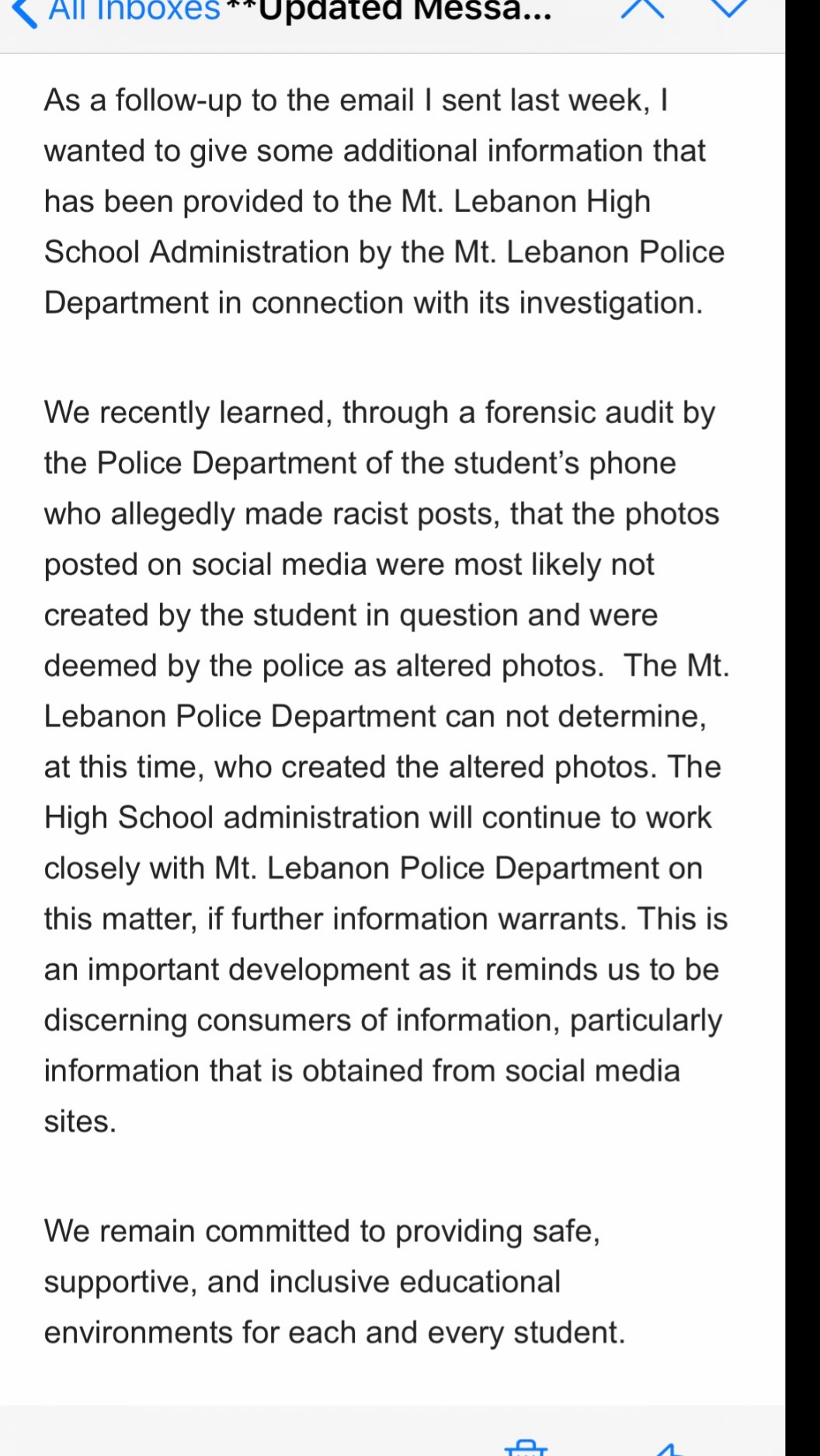 This however, doesn’t  explain the comments made in a classroom full of multiple witnesses, or accounts for the allegations of assault involving minors.