Brentwood’s The Crack’d Egg Ran By a Crack Pot?

The Crack’d Egg restaurant in Brentwood has been operating with Health Department permits since August of 2020, and has a record of critical food safety issues.   They’ve been ignoring Commonwealth of Pennsylvania, and Allegheny County Health Department Covid-19 mandates since March. Their Permits were pulled in August, and the Restaurant ordered closed for cleaning, and until covid-19 compliance was met, and safety plans were submitted. They said fuck it and have been open at full capacity with zero social distances or mask wearing in defiance, and the Owners Donald and Kimberly Waigand believe themselves to be true American Patriots fighting the Tyranny of government oppression, and seem to get off on all the negative attention in the press, and on social media platforms.

Daily they put profit over the safety and health of their staff and customers while sharing conspiracy theories from Alex Jones, right wing groups such as the proud boys, and believe that Donald Trump won the election. In Kimberly Waigand’s mind, She is an American hero, and being oppressed by a government that’s trying to save lives and slow the spread of the Corona virus which has wrecked the entire world. She doesn’t care about any of the thousands of other Pa business owners and businesses who are following all the current mandates and restrictions in place, nor does she care about the millions of unemployed Pennsylvania residents who are sitting at home due to their places of business closed, at altered hours, or laid off because their places have closed permanently. She believes in Law and order for an election to be overturned and for Law and order to be carried out against peaceful protesters all across the country, but doesn’t give a shit that she and her husband are blatantly breaking the law for operating a restaurant for months without permits to legally operate. 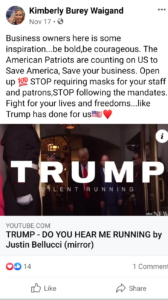 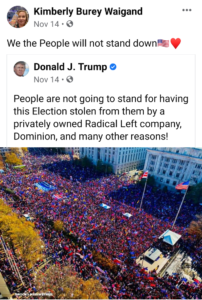 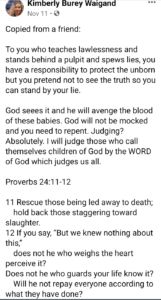 A Go Fund Me was set up for the restaurant asking for half a million dollars to fight the government oppression of governor Tom Wolf, yet they have filed no such lawsuits against Pennsylvania. Waigand did file for Bankruptcy citing Covid-19 Struggles as the cause, but since they’ve been operating almost daily at full capacity and customers have been packing the location, it’s hard to believe.  They Are currently Suing the Allegheny county Health Department in court.

The Allegheny County Health Department currently is suing in Civil court to have a judge order the restaurant closed and shuttered for operating without a permit since August. 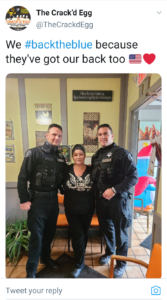 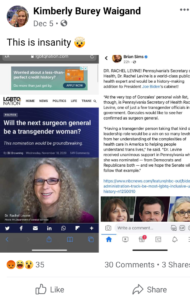 Over the weekend, two Allegheny County Sherriff deputies were patronizing the restaurant amid dining closure orders and were photographed posing with Waigand who shared the image on social media declaring they “back the blue” the images were removed from social media after fears that the deputies would get into trouble surfaced.

This prompted the Health Department to return to the restaurant to shut them down for a sixth time, While Waigand began fighting and arguing with everyone on social media who were upset over the constant violations.

They have a description on their website stating, “Here at The Egg we do not follow the Edicts of the Tyrannical Government. We Walk as Free People. No Masks, No Social Distancing, No Shut Down.” 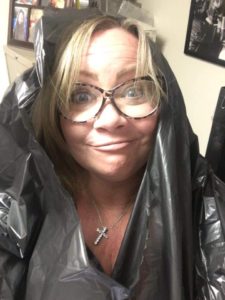 The restaurant hosted a full dining room children’s brunch with Santa on Sunday, and are advertising an all you can eat buffet for this weekend.

And then The Crack’d Egg Teamed up with the hate group, Proud Boys for a toys for tots campaign.
The problem with this is that Toys for tots wasn’t on board for this even though they’re logos were used in advertising, and a Steel City logo was stolen from Steel City Apparel without their knowledge or permission. Toys for Tots Released a statement that they will never partner with the proud boys, and will not accept donations from this event.

Despite being shut down for the 6th time by the Allegheny County Health Department yesterday, The Crack’d Egg was open at 7 am taking food orders with an open dining room. When I called for a comment at 7:09 Am this morning, I was hung up on. A Status hearing for their lawsuit against the health department, the Health Department’s motion for closure, and bankruptcy proceedings via teleconference took place at 9 AM.