Austin Ayers has once again rebranded his social media accounts to avoid being discovered as the fraud he is, and still trying to hide his current slew of criminal  charges from those who follow him. He and his friend Ryan Focht’s (back to using the @legoflats handle on twitter after being suspended from his other account.) latest fraud is pretending that they are from Wall Street Bets, and are experts in  the stock market and cryptocurrency. Their combined legal fees are gonna be expensive, so the duo is begging for donations online as they give their “expert advice) Ayers is now calling himself @kingvalhallawsb. 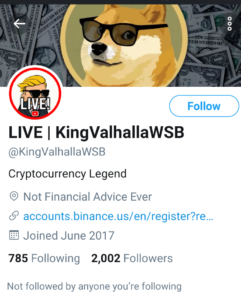 A quick search on Ayers’ reddit activity shows he never was a member of Wall Street Bets on Reddit, nor has he posted in that forum at all. Nor is their any evidence that he’s an expert stock advisor or a cryptocurrency expert as his Live streams consist of daily 11 plus hours of incoherent rambling, and guessing. Just another con from two dishonest men, desperate for online relevance, and stealing valor from those who are actually part of the current stock and crypto currency excitement and trend going on.

The conmen duo are also claiming that All finance apps, Twitter, Facebook, and Tik Tok are conspiring against them to stop their messages from going out. Those statements are simply not true.

Ayers and Focht will be in court on April 9 to face multiple charges including fraud, conspiracy, tampering with records, making false statements under penalty of perjury and more. If convicted Ayers faces up to 20 years in prison, and Focht faces up to 5 years in Prison