The Burger King in Pittsburgh’s South Side is already infamous as being the location of a fake franchise for a short time, but the fast-food joint located on East Carson Street isn’t done making waves.

According to a viral tweet, the South Side Burger King closed for a time starting the evening of July 25 due to the staff walking out. The closure lasted until at least the morning of July 26, when City Paper confirmed that the Burger King was closed and that a staffing shortage was a reason why. This Burger King location, at 1820 E. Carson St., is listed as being open 24 hours a day for its drive-thru, and 6 a.m. to 10 or 11 p.m. in the dining room.

According to independent journalist Don Carpenter, who was listening to a police scanner on July 25, the Pittsburgh Police were sent to the Burger King on East Carson Street to investigate a report of an unattended and empty building, and the police were under the assumption that the staff had walked out.

When contacted, Pittsburgh Public Safety officials didn’t say why the employees had walked off the job, but did confirm that the building was vacated, but not locked or closed on the night of July 25. According to assistant public safety officer Maurice Matthews II, Pittsburgh Zone 3 Police officers made contact with a key holder from the Burger King, who then came and secured the building.

When City Paper showed up at the Burger King at 9:30 a.m. on the morning of July 26, the dining room was closed and signs on the doors read “Our apologies for the inconvenience, dining room is temporarily closed, thank you.” One employee could be seen inside the dining room, cleaning tables. But when a driver pulled up to the drive-thru, he quickly exited the drive-thru and told City Paper that the employee told him the restaurant was closed until more staff showed up.

This Burger King location is owned and operated by TOMS King, an Illinois-based company that runs more than 130 Burger King restaurants across Illinois, Ohio, North Carolina, Pennsylvania, and Virginia. A request for comment from TOMS King was not returned by press time.

Pittsburgh has recently seen a number of worker walkouts that have caused stores or businesses to close. In June, at least seven workers at a Subway restaurant in Greenfield walked out and posted a sign on the door announcing that they had quit. On June 16, a sign was taped to the door of the Family Dollar on Penn Avenue in Garfield that read “Staff Quit! Y’all Be Easy.” KDKA spoke to locals in Garfield, who indicated this wasn’t the first time worker shortages caused the location to be closed. 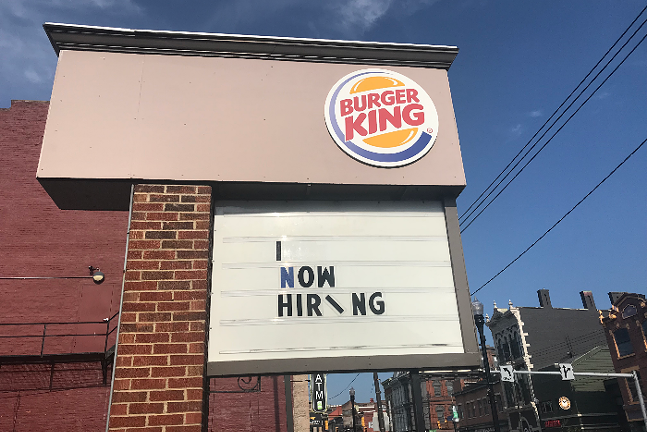 CP photo: Ryan Deto
The marquee of the Burger King on East Carson Street in Pittsburgh’s South Side neighborhood.

Staffing shortages have also caused other restaurants in the area to limit hours, and a lifeguard shortage in Pittsburgh has caused the city to limit the number of reopened pools this summer.

It’s not exactly clear why some workplaces in Pittsburgh are having trouble filling positions and retaining workers. Some argue that raising wages will solve the problem, while others say ongoing anxieties surrounding the pandemic are keeping some from returning to public-facing jobs, and economists note Pittsburgh’s demographics as a barrier to full employment.