Four Days before he is formally arraigned in The Armstrong County’s Criminal Court system for Impersonating public servants, fraud and multiple other charges, Austin Ayers dropped a serious of late night rants to “clear up all the rumors and lies about him.

In the first two videos he details his “extensive career as a firefighter of over 9 years” that “ended in 2019 when he received a Cervical spinal cord injury, and was found by paramedics in a burning structure fire after being unconscious for over 40 minutes. What paramedics would be doing inside a burning structure fire is a mystery as that wouldn’t happen.  Ayers made it up.  A cervical spinal chord injury is serious and would require serious medical care, and treatments for at least 6 months. Ayers wasn’t even a firefighter in 2019 or even 2018 when he pled guilty and was convicted for hiring a teen to shoot up someone’s house. (those charges alone would disqualify him from being a volunteer firefighter.)

In other parts of his 4 part rant, he mentions leaving a fire department for personal reasons. (the timing matches that of the conviction for harassing, and shooting up someone’s house.

Around the time Ayers claimed he was still a firefighter and injured severely he was also working on film sets in the Pittsburgh area, running a fake news website, and harassing women which shows that not only was he not injured, but he wasn’t a firefighter.

He goes on to discuss doing 800 in an ambulance as an emt trainee, but he’s neither registered with the commonwealth of Pa as an EMT, nor did he take his NREMT certifications because of his criminal charges for impersonation.

He blamed myself and this website for misinformation and lies for his criminal charges while also mentioning that there’s no way anyone can verify his claims. He was arrested. That happened. And as early as 2017, a Facebook page was dedicated to exposing Austin Ayers in Butler County as a fraud, and phony firefighter. 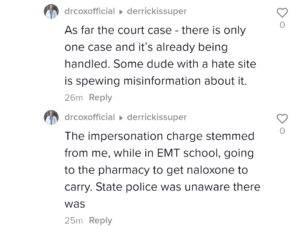 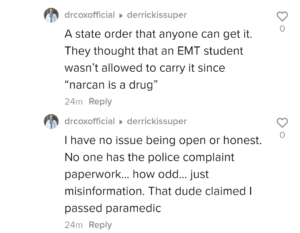 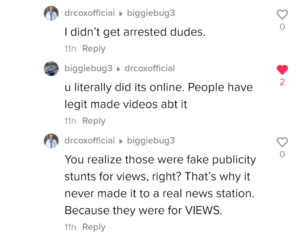 He claims this is a hate website about him, but had Ayers never created a fake covid scare in March of 2020, I never would have caught onto his scams and lies.

He also claimed he never said he was a paramedic or an EMT, but statements and videos online from as late as October 2020 show that is a lie as well:

The backlash and rants come after spending a week attacking volunteer firefighters, and paramedics on tik tok.

Ayers will be arraigned on Monday at 1 pm for his criminal charges, and will have to explain himself before a Judge, God, and the general public, and/or a jury of his peers very soon.

He’s having trouble keeping his stories straight, and is slowly circling the drain in a desperate attempt to keep up the image that he is a hero when all he has done is steal valor from real heroes.