In a predictable fashion, and not one to miss out on using tragedy for his own personal game, Austin Ayers rebrands his internet handles, and has set him up as the chief mourner for Gabby Petito. (If you’re not familiar with the Petito Case, catch yourself up right here.)

Ayers even went so far as to follow women up to Gabby’s memorial service in New York, while trying to pass himself off as one of Petitio’s close friends on line. Ayers claimed they were friends on social media, but we’re going to show you how this is yet another one of his lies, and how he used her murder for attention online while facing criminal charges for perjury, tampering with public records, theft and Impersonating public servants in Pennsylvania in an unrelated case.

Ayers went on a 13 plus hour twitter meltdown down called out on lying about knowing Petito, or being asked why he even went to the memorials service and funeral to take pictures and meet girls. Anyone that takes pictures at a funeral and memorials ervice for recognition on the internet is indeed using this tragedy for internet clout 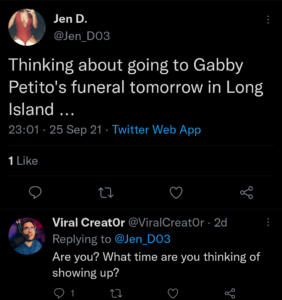 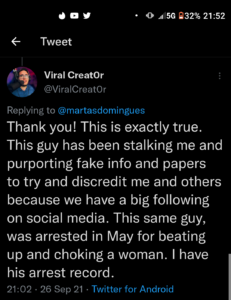 If you check out Gabby Petito’s Instagram, Youtube and Tik Tok accounts, you will discover that not only Has Petitio never followed Austin Ayers on his Youtube, Instagram, Tik tok or Facebook pages, but she has never even interacted with him a single time via her socials or his cringeworthy material. I say again SHE HAS NEVER FOLLOWED AUSTIN AYERS ON SOCIAL MEDIA EVER!

Ayers claims that they exchanged messages on instagram and tik tok, but on tik tok you can’t message people who are not on your friends list, and went to post a cringey photoshopped fake insta conversationto prove they were friends, but if you look carefully at this “Instagram screenshot” you’ll notice some key things are missing from what a real Instagram message and convo looks like. (we’ll get into that shortly.)

This what an actual conversation in instagram looks like, and i took three of my convos from my page to show you. Not the use of dates, times etc in the messages: 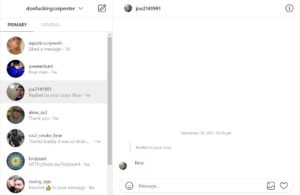 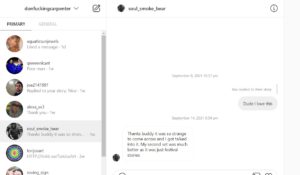 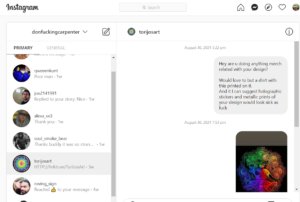 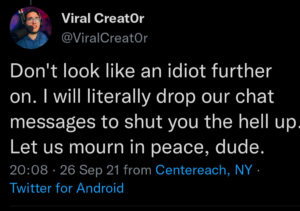 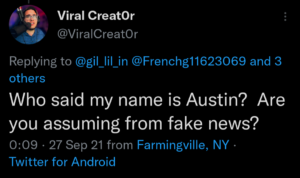 here’s Ayers’ “proof” to make us look stupid.. do you see anything missing like the dates, and times of the convo? they’re missing because this isn’t a real Instagram conversation. it’s been photoshopped: ( pretty sure the only person looking like an idiot further is Ayers once again.) next to the fake convo, is the original “public statement he made on Being intimate with Gabby Petito before he changed it after this article was written: 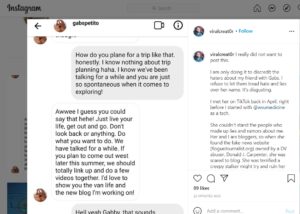 In the original Instagram post Ayers says he never met Gabby Petitio in real life. This was removed after posting: 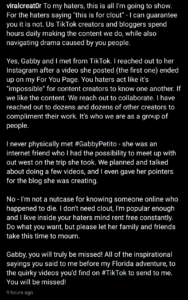 But on tik tok, he claims they were the best friends and hung out together in Florida:

Again Petitio’s own social media accounts prove she never knew him, followed him, or even spoke to him.

Ayers mentioned on twitter I was “arrested for abusing my elderly mother in May”, That’d be a dark miracle considering my mother died in 1994, but I was indeed cited for disorderly conduct in May 2021 for disorderly conduct when I drunkenly relieved myself in an alley outside of Slapshot’s bar in Dormont. It was wrong to do, I knew it was wrong, I did it anyway, and was held accountable for my actions by Dormont Police, and I pled guilty to the charge because I did it, and am an adult who can accept consequences for my actions. You can see the original citations below, and a reenactment of the incident: 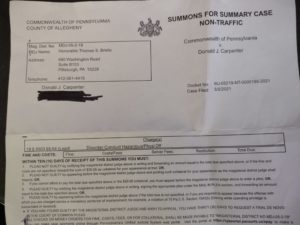 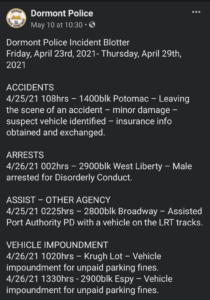 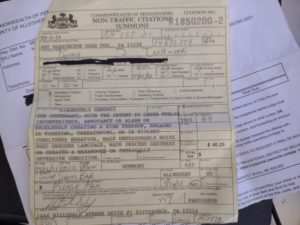 Once again Ayers has made of a scenario for his non existant millions and millions followers.

In his twitter meltdown he denies his own name is Austin Ayers but, once you stop laughing you can look on his socials where he repeatedly tells everyone his name. But let’s look at Austin’s other greatest hits of lies and scams for clout shall we?

Ayers is back in court in November for a criminal case status hearing before his trial proceeds.