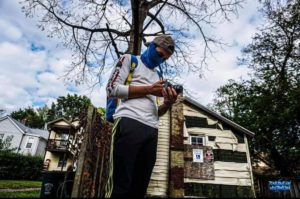 If you’re wondering who, or what is Zay Zay, I had a very hard time trying to find out who he is while going through all 7 of his personal Face Book pages. What I do know about “Zay Zay” is that all 7 of his pages often lament that he “doesn’t have a female to cook him dinner”, and often posts about how a “female” is supposed to serve a male in the relationship. All these posts are mixed in with how he’s an active member in the Pittsburgh music scene and heavily involved in music in other scenes as a photographer/videographer. Reaching out to friends in the Pittsburgh music industry and music scenes abroad, no one knows who this person is.

What we do know is that Zay Zay has been hitting up female show goers and performers offering them “Free photo and video sessions.” This is often a tactic used by shady(and wanna be) photographers in attempts to subjugate and sleep with women. In this case that came to my attention, he hit up a transgendered Pittsburgh DJ with this “awesome deal”, and then quickly back tracked once he realized that she was transgender. Most Likely he found her attractive, and then quickly back tracked when he discovered she is trans.

In regards to the statement that he “shoots raves all the time,” that was quickly debunked as a lie. His company “Top Vizionz” doesn’t exist according to any state business registry that he claims to do business in, nor is there a record of any projects this person or his company has worked on.

His Instagram seems to mirror the work of others, and they seem to just keep him around. He claimed to do the video for GLO HARD Pittsburgh series, but another videographer (shown above) is actually credited with filming and producing the video. 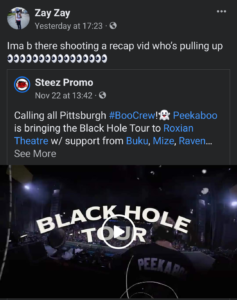 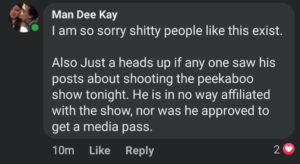 He then claimed on Facebook, that he was booked to shoot and produce the official recap video for Peekaboo’s tour stop in Pittsburgh at the Roxian Theater, but it was quickly proven that not only did any of the artists on that lineup book this man, but the Promoters themselves didn’t know who he was, and did not book him for the event at all. ZAY ZAY was lying on his multiple social media pages to make himself seem bigger than what he actually is.

When confronted with his lies, and treatment of members of the LGBTQ community, Zay Zay quickly put on his tap dancing and bigot shoes in this discussion with another Pittsburgh Promoter who informed him of his scene wide blacklist: 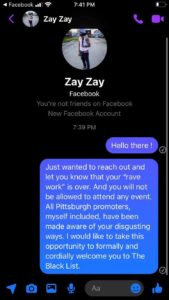 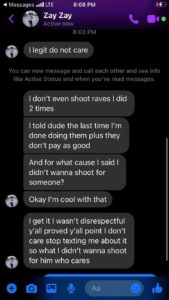 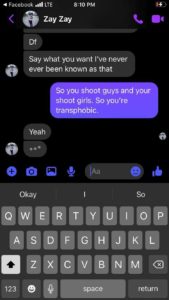 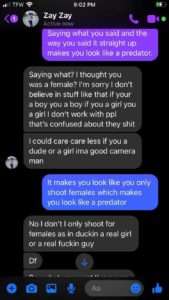 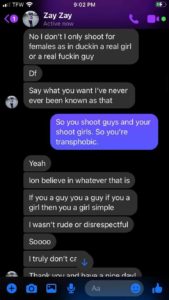 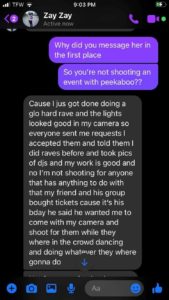 He quickly admits that he “Doesn’t do rave work at all, and has only done two events in his “career”, and there’s only such things as guys who are born male, and females who are born female.

He goes on to admit he never was booked for the peekaboo show, and that “a friend booked him just to shoot themselves dancing in the crowd.” An extremely laughable scenario that simply doesn’t happen at shows, nor does the Roxian Theater or Live Nation photo/video policy allow for such a thing.

He further goes on to discuss how transgender people aren’t people, but males or females with chemical imbalances that make them what they are. 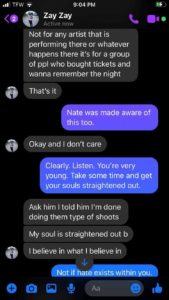 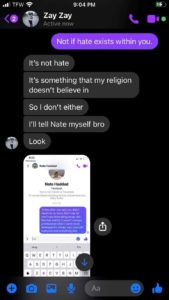 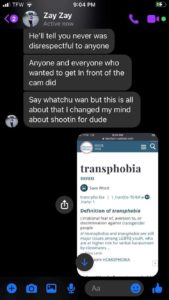 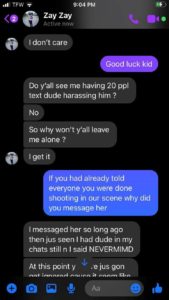 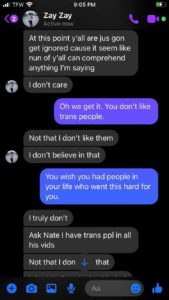 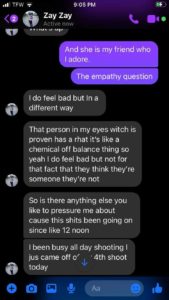 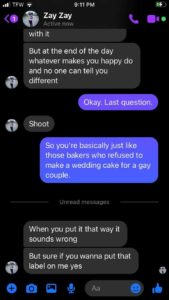 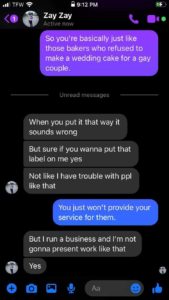 What we have here is just another scumbag who was busted trying to solicit women for sex in exchange for “free photos”, and a liar who got busted trying to prey on someone and instead exposed themselves as yet another predator in the Pittsburgh Scene